February 4, 2021 — Wu Man, “the world’s finest player of the pipa” (The New York Times), is joined by one of her Silkroad Ensemble bandmates, shakuhachi virtuoso Kojiro Umezaki, on a new album, Flow (流芳), released by In a Circle Records (ICR). The album is currently available for pre-order on Bandcamp (digital and physical) and will be available Friday, February 19, through Apple Music, Spotify, Amazon, and other major outlets.
Drawing upon folk tunes, contemporary styles, elements of improvisation, and the timbral interplay between these two ancient Chinese and Japanese instruments, the solo and duo works on this album are meant to evoke the changes of season in a traditional Eastern garden.

Wu Man said:
“The Chinese pipa and Japanese shakuhachi are two of the most important and recognizable instruments in the East Asian musical tradition. They both date back to ancient times, and each has its own unique story, sound world, performance techniques, and expressive charm… The shakuhachi has a distinctive sonority that always reminds me of autumn in Japan, while the lute-like pipa distinguishes itself through its characteristic tremolos and unique style of melodic ornamentation, among other qualities. Together, these two ancient musical instruments create a musical experience unlike any other.”

The music was originally composed by Ms. Wu and Mr. Umezaki for a video installation by Beijing-born visual artist Tang Qingnian.

The two artists explain:
“Not far from downtown Los Angeles lies Liu Fang Yuan, a spectacular 15-acre classical-style garden inspired by those in Suzhou, China, that is part of The Huntington Library, Art Museum, and Botanical Gardens. In 2019, The Huntington commissioned Tang Qingnian to create a video installation [Fragrant Rhythms: The Seasons of Liu Fang Yuan] to commemorate the garden’s latest phase of expansion. The video, created as part of the Cheng Family Foundation Visiting Artist program, celebrates scenes from all four seasons in the garden, plus its ever-present landscaping of bamboo.”

Flow comprises five pieces, each described below by Mr. Umezaki:

1. Winter (Night Thoughts II): “Its main theme is derived from skeletal notation discovered in the Buddhist caves at Dunhuang, scribed back in the Tang Dynasty.”

3. Summer: “A pipa solo in successive phases, each as if deeper and deeper into the season’s heat—at times with the dryness of shakers and tightness of the pipa’s muted strings.”

4. Autumn: “Electronic replications of the pipa and shakuhachi emerge like well-choreographed leaves amidst melodic outbursts suggestive of the winds that forecast the coming of winter.”

5. Bamboo: “A closing solo respite on the shakuhachi. Simple and ever-present, it allows one to step outside of seasons, if just for a brief and suspended moment.”

Ms. Wu and Mr. Umezaki appear on previous ICR releases, including as fellow members of the Silkroad Ensemble (Falling Out of Time and the soundtrack to Ken Burns and Lynn Novick’s The Vietnam War). Mr. Umezaki’s solo music has also been released by the label. 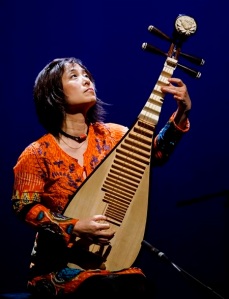 Recognized as the world’s premier pipa virtuoso, Wu Man (吴蛮) is a soloist, educator and composer who gives her lute-like instrument—which has a history of more than 2,000 years in China—a new role in both traditional and contemporary music. She has premiered hundreds of new works for the pipa, while spearheading multimedia projects to both preserve and create global awareness of China’s ancient musical traditions. She has performed in recital and with major orchestras around the world, is a frequent collaborator with ensembles such as The Knights and the Kronos and Shanghai Quartets, and is a founding member of the Silkroad Ensemble. She has appeared in more than 40 recordings throughout her career, including the Silkroad Ensemble’s Grammy Award-winning recording Sing Me Home, featuring her composition “Green (Vincent’s Tune).” She is also a featured artist in the 2015 documentary The Music of Strangers: Yo-Yo Ma and the Silk Road Ensemble. Born in Hangzhou, China, Wu Man studied at the Central Conservatory of Music in Beijing, where she became the first recipient of a master’s degree in pipa. She moved to the U.S. in 1990 and currently resides in California. For more information, visit WuManPipa.org.

Noted by The New York Times as a “virtuosic, deeply expressive shakuhachi player and composer” and the Los Angeles Times as one of the “better kept secrets of Southern California music,” Kojiro Umezaki (梅崎康二郎) has performed regularly with the Silkroad Ensemble since 2001 with which he appears on multiple recordings including the Grammy Award-winning Sing Me Home, A Playlist Without Borders, Off the Map, and the Grammy-nominated 2015 documentary film The Music of Strangers, directed by Morgan Neville. In a Circle Records released (Cycles), an album of original work, in 2014. Other notable recordings as performer, composer, and/or producer include Brooklyn Rider’s Dominant Curve, Yo-Yo Ma’s Appassionato, Nicole Mitchell’s Mandorla Awakening II, Kei Akagi’s Aqua Puzzle, The Silk Road: A Musical Caravan (Smithsonian Folkways), and Huun Huur Tu’s Ancestors Call. Born to a Japanese father and Danish mother, Mr. Umezaki grew up in Tokyo, and continues to explore global and hybrid practices in music. For more information, visit KojiroUmezaki.com.
______________________________________________________________