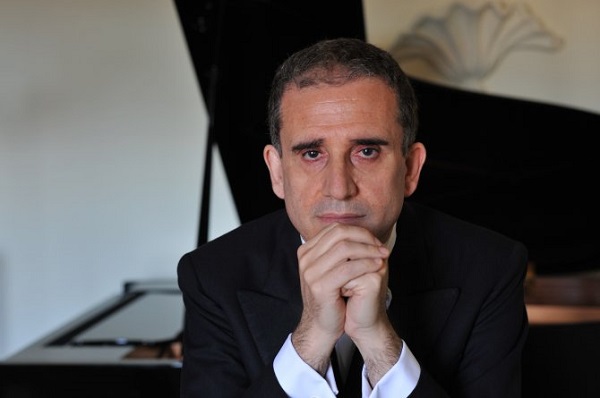 The program opens with the myth of Orpheus, the supremely gifted musician, beloved of Apollo, who attempts to rescue his dead wife from the underworld, represented by the “Dance of the blessed spirits” from Gluck’s opera, Orfeo ed Euridice.
It’s followed by the extraordinary Sonata in G minor, Op. 50, No. 3, Didone abbandonata (“Dido abandoned”) by Muzio Clementi.
The composer’s only programmatic work, it is inspired by the tragic love story of Dido, Queen of Carthage, and the Roman warrior Aeneas.
The first half of the program concludes with the U.S. premiere of Colasanti’s Rumbling Gears for solo piano.
The piece, which Colasanti dedicated to the 3D printer, is the composer’s comment on the myth of technological triumph in our time.

The tragic love of Hero and Leander is the theme of Liszt’s Ballade No. 2 in B minor, which opens the second half of the program.
It’s followed by the U.S. premiere of Colasanti’s Orfeo, Flebile queritur lyra (“A lamentable problem”) for voice, piano and clarinet, (2009) with a text from Ovid’s Metamorphoses.
The clarinetist for this performance is Paolo Marchettini, and the narration, in Italian, is by Giorgio van Straten, Director of the Italian Cultural Institute of New York.

Ms. Colasanti’s Requiem for the victims of the 2016 earthquake in central Italy premiered to great acclaim at Spoleto’s Festival of Two Worlds this summer.
Commenting on his program, De Palma said, “Myths are narrations, ridden with sacredness—stories of events occurring in a far-off past. They are part of the history of all people. Once passed on by a sole narrator, they are now circulated by mass media, to be remembered, adapted, and kept alive forever in every corner of the world.”

Tickets for Sandro De Palma’s December 3 recital, priced at $45, 40 and 35, are available at the Carnegie Hall Box Office, 154 West 57th Street [57th Street and Seventh Avenue] or may be charged to major credit cards by calling CarnegieCharge at 212-247-7800 or by visiting Carnegie Hall’s website, carnegiehall.org.

About Sandro De Palma
Italian pianist Sandro De Palma is a frequent performer on recital and concert stages in Italy and throughout Europe.
As soloist, he has performed concertos with the orchestras of La Fenice, Venice, Rome, Milan, the Naples Radio Orchestra, St. Petersburg Philharmonic and Moscow Symphony Orchestras. He has collaborated with renowned musical artists, including Juri Temirkanov, Andrea Bocelli, Ilia Kim, and Donato Renzetti.
As soloist and dedicated chamber musician (performing with violinists Boris Belkin, Pierre Hommage and Ilya Grubert in duo recital, with the Prazak Quartet, Quartet Ebène, Quartet Amarcorde, and with wind and string players of the Berlin Philharmonic), he has appeared at Wigmore Hall, Kammermusiksaal der Philarmonie, Berlin, and at prestigious international festivals including the 20th Brescia and Bergamo International Piano Festival, “La folle journée de Nantes,” the International Piano Festival “La Roque d’Antéron,” and festivals in Tokyo and Shangai. Recent engagements include performances of Brahms’ Second Piano Concerto at the Musikverein and a major recital tour in China.
Born in Naples, Sandro De Palma studied with Massimo Bertucci and Vincenzo Vitale and made his recital debut there at the age of ten playing works by Bach and Schubert.
He was invited by Nikita Magaloff to attend the prestigious Conservatoire in Geneva and at the age of 19, won First Prize at the Alfredo Casella International Piano Competition.
Two years later, the pianist won First Prize in the Bruce Hungerford Memorial Foundation compeitition in New York, which was followed by his U.S. recital debut at Carnegie Hall.
Among his other awards are prizes at the Clara Haskil and Dino Ciani Competitions in Montreux and Milan, respectively.
De Palma also studied with Alice Kezeradze-Pogorelich.
De Palma’s first recording was an album of works by Liszt; he has also recorded works by Cilea and Brahms.
He collaborated on the first-ever recording (for Fonit Cetra) of Clementi’s Gradus ad Parnassum, which won the 20th annual Italian Critics Award.
From 1999 to 2010, De Palma was artistic director of the Bellini Teatro Music Association in Naples, and the May Festival of Music in Naples.
He is chairman and artistic director of the Muzio Clementi Music Association which he founded in 2000.
The Association has presented concerts at Spoleto’s Festival of Two Worlds (2013 and 2014), at Teatro dell’Opera of Rome, and the annual concert series at the Casanatense Library, Rome, among other notable venues.

One of Italy’s most lauded composers, Silvia Colasanti was born in Rome in 1975 and received a diploma in Piano and Composition from Santa Cecilia Conservatory. She continued her musical training with Fabio Vacchi, Wolfgang Rihm, Pascal Dusapin, and Azio Corghi.
Colasanti received the prestigious Goffredo Petrassi Prize and, in March 2013, was named Cavaliere by Giorgio Napolitano, President of the Italian Republic.
She has composed some 35 works for orchestra, chamber ensemble, voice, and stage, which have been performed by artists who include Reinbert de Leew, Daniel Kawka, Vladimir Mendelssohn, Massimo Quarta, David Geringas, Enrico Bronzi, Camerata Salzburg, the Quartetto di Cremona, Gyorgy Gyorgivanyi Rath, Lior Shambadal, Arturo Tamayo, and Jacques Zoon, and by major European orchestras and at prestigious concert halls theaters, and festivals among them, Accademia Nazionale di Santa Cecilia (Rome), Théâtre des Champs-Élysées (Paris), Orchestre National de Belgique (Brussels), the Konzerthaus (Berlin), Festival Pablo Casals (Prades), the Biennale Musica (Venice), Settembre Musica (Turin), Kuhmon Kamarimusiikki (Kuhmo, Finland), Milano Musica (Milan), the Orchestra Verdi (Milan), the Maggio Musicale Fiorentino (Florence), the White Crow Music Festival (Leiden), the Royal Scottish Academy of Music and Drama (Glasgow), the Orchestra Nazionale Rai (Turin), the Orquestra Metropolitana de Lisboa (Lisbon), the Accademia Musicale Chigiana (Siena), and the Orchestra della Toscana (Florence).
Colasanti’s children’s opera Il sole, di chi è?, based on a text by Roberto Piumini, co-commissioned by Cidim and the Maggio Musicale Fiorentino, premiered in 2009 at the Teatro Ponchielli in Cremona and was presented during the 2009-2010 season by a number of prestigious Italian institutions.
Her other works include: Faust. Tragedia soggettiva in musica, based on a text by Ferdinand Pessoa; Concerto for Cello and Orchestra (2012) for David Geringas; the lyric opera “La Metamorfosi” (Die Verwandlung), based on Franz Kafka’ novel; Tuli tuhmaksi rupesi, for quartet and piano, commissioned by Kalevalaseura (Kalevala’s Society); Chicino e Cicotta, a young people’s opera based on a text by Roberto Piumini; Trio for violin, cello and piano (written for the Trio di Parma); Adagio, written for David Geringas.
Among the composer’s numerous awards and commendations are top prizes from Zeitklang, the International composition competition of Musikfabrik NÖ (Vienna), the Lopes Graça (Lisbon), and the Nino Carloni Prize in the “young composer” category (2010).
Radio Rai chose her as the composer to represent Italy at the International Rostrum of Composers.
She served as artist in residence at the Civitella Ranieri Foundation in New York and was chosen along with the Quartetto di Cremona for the Fondazione Spinola – Banna per l’Arte’s Progetto Musica 2007.
Sylvia Colasanti teaches at the Perugia Conservatory of Music.
Her work is published by Casa Ricordi.
Her first recording, In-Canto, was released in 2011 by Dynamics.
________________________________________________________