Semyon Bychkov and The Vienna Philharmonic’s Recording of Franz Schmidt’s Symphony No. 2 and Richard Strauss’s Dreaming By The Fireside To Be Released in The U.S. by Sony Classical on June 2 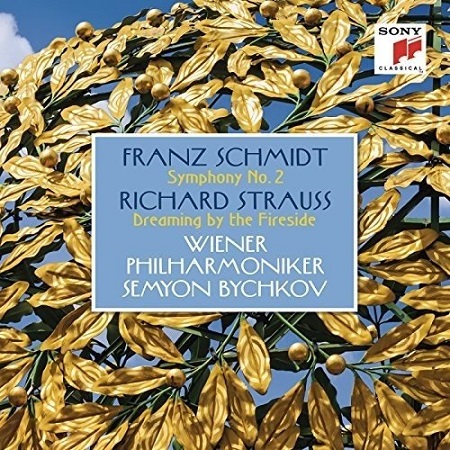 NEW YORK, NEW YORK (May 16, 2017) — Recorded at the Großer Saal in Vienna’s Musikverein, conductor Semyon Bychkov and the Vienna Philharmonic Orchestra’s recording of Franz Schmidt’s Symphony No. 2 in E-flat major and Richard Strauss’s Dreaming by the Fireside (Träumerei am Kamin), a short symphonic interlude from the composer’s opera Intermezzo, is scheduled for release by Sony Classical in the U.S. on June 2. Pre-orders are available from Amazon.
While both works and their composers have strong ties to Vienna and the Philharmonic, the centerpiece of the recording is Schmidt’s Symphony No. 2. Franz Schmidt (1874–1939) was not only a leading Austrian composer, but a cellist with the Vienna Court Opera Orchestra and professor at the Vienna Conservatory who helped shape an entire generation of VPO musicians. A neglected masterpiece, his Symphony No. 2 was premiered by the Court Opera Orchestra in 1913 under conductor Franz Schalk—the symphony’s dedicatee—and first performed by the VPO under Felix Weingartner in 1914. In the recording’s liner notes, Harald Haslmayr describes the work as “a kind of ‘Pastoral’ Symphony,” evoking through music the images of a “babbling brook,” “forest murmurs from the Vienna Woods,” and “Schmidt’s Pannonian birthplace of Pressburg (modern Bratislava).”
Mr. Bychkov first conducted the VPO in Schmidt’s symphony at the Musikverein in May 2014. He explored the work at the orchestra’s request, with plans to perform it both in concert and on record. Leading up to their first Vienna performance, he introduced the symphony to the students of London’s Royal Academy of Music, where he holds the Klemperer Chair of Conducting. The following season, Mr. Bychkov conducted the work with the Accademia Nazionale di Santa Cecilia in Rome and the Leipzig Gewandhaus Orchestra before returning to tour and record the work with the VPO. His collaboration with the VPO on the Schmidt symphony concluded with a September 2015 performance at the BBC Proms.
The shorter work on the recording, by Schmidt’s contemporary Richard Strauss (1864-1949), is Dreaming by the Fireside (Träumerei am Kamin), a symphonic interlude from the composer’s 1924 opera Intermezzo. The opera is a “bourgeois comedy” set in Vienna, composed when Strauss co-directed the Vienna Staatsoper with Franz Schalk (though the opera premiered at the Dresden Semperoper). Now seldom staged, Intermezzo includes symphonic interludes that are more frequently performed, with this one from between Act I, Scenes 5 and 6 being the most popular. In his liner notes, Harald Haslmayr says:
…in the present performance [Dreaming by the Fireside] becomes the ideal echo of Franz Schmidt’s Second Symphony. Here too we hear that genuinely Austrian, lavishly luxuriant orchestral sound that Herbert von Karajan, no less, once described so aptly as “old-world warmth”.
Known as a leading interpreter of Strauss’s music, both in the concert hall and opera house, Mr. Bychkov has now conducted six recordings featuring the composer’s music. On his earlier Strauss recordings, he led the Philharmonia Orchestra, Royal Concertgebouw Orchestra, and WDR Sinfonieorchester Köln.
Mr. Bychkov’s acquaintance with the VPO dates back to 1999 when he made his debut at the Vienna Staatsoper conducting Strauss’s Elektra. He has since been a frequent guest at the Staatsoper, leading performances of Tristan und Isolde, Strauss’s Daphne, Rosenkavalier, Lohengrin, Khovanshchina, and—this spring—Parsifal. He made his symphonic debut with the VPO in 2003 conducting Bach’s Mass in B minor and has since appeared often with the orchestra at the Musikverein, where he celebrated his 60th birthday with three concerts in 2012. In addition to regular concerts with the VPO over the past few years, Bychkov conducted the Summer Night Concert at the Schönbrunn Palace in May 2016 and the annual Vienna Philharmonic Ball in January. The Sony Classical recording of the Summer Night Concert was Mr. Bychkov’s first with the VPO, and the performance was also released on DVD and Blu-Ray. The present recording is his second with the VPO.
One of the world’s most esteemed conductors, Semyon Bychkov has conducted virtually all of the major orchestras in the U.S. and Europe and previously served as Music Director of the Buffalo Philharmonic, Grand Rapids Symphony, and Orchestre de Paris, and Chief Conductor of both the WDR Sinfonieorchester Köln and the Dresden Semperoper. In addition to holding the Klemperer Chair of Conducting at the Royal Academy of Music, he holds the Günter Wand Conducting Chair with the BBC Symphony Orchestra, with which he appears annually at the BBC Proms. In 2015, the International Opera Awards named him “Conductor of the Year.”
Mr. Bychkov has an extensive recording catalog and, in 2016 with the Czech Philharmonic and Decca Classics, launched The Tchaikovsky Project, a recording cycle that will encompass Tchaikovsky’s complete symphonies and piano concertos, as well as other selected orchestral works. Previously, his recording of Lohengrin with WDR was voted BBC Music Magazine’s 2010 “Record of the Year,” while his recording of Tchaikovsky’s Eugene Onegin with the Orchestre de Paris was hailed by Opera magazine as one of the 30 “all-time great recordings.”

Currently celebrating its 175th anniversary, the Vienna Philharmonic Orchestra is renowned for its distinctive musical style passed from generation to generation, as well as its structure and history. Formed on March 28, 1842 by conductor-composer Otto Nicolai and members of the Imperial Court Opera Orchestra as a professional orchestra for the performance of symphonic repertoire (which until that time had not existed in Vienna), the orchestra’s initial objective was to perform symphonies by Mozart and Beethoven in their own city. Today, the Vienna Philharmonic presents more than 40 concerts annually at the Musikverein in Vienna, performs over 50 concerts on tour around the world, appears every summer (since 1922) at the Salzburg Festival, and presents a New Year’s Concert, which is broadcast internationally to more than 90 countries, and the free Summer Night Concert Schönbrunn, attended annually by up to 100,000 people.