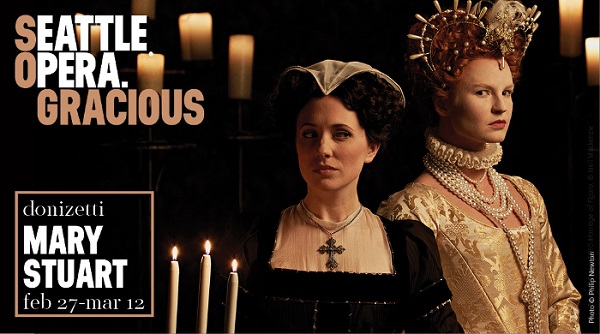 SEATTLE – Sparks will fly and heads will roll in Seattle Opera’s tale of English royalty, Mary Stuart, coming to McCaw Hall for the first time this winter.
Composed by Gaetano Donizetti, Mary Stuart depicts a fictitious confrontation between two historic rulers told with searing emotions, extravagant period costumes, and virtuosic bel canto singing.
The story dramatizes the conflict between Mary, Queen of Scots and her jealous cousin Elizabeth I, who resents Mary’s popularity, Catholic faith, and her position as the next in line to inherit the throne of England.
As the opera speeds toward its powerful conclusion, Elizabeth resolves to eliminate her rival, while Mary discovers the strength to embrace her own dark fate.
Pre-performance activities in the lobby will help attendees connect more deeply with the characters, composer, and history of these monarchs, and will ensure an unforgettable experience from the moment patrons walk through the front door.

“I am delighted that Seattle Opera is presenting Mary Stuart for the first time in its history, for it is long overdue,” said General Director Aidan Lang.
“Donizetti wrote nearly 70 operas, and until recently, only a handful of these were part of the standard operatic repertoire. But that has since changed, and Mary Stuart has led the way. It is an extremely powerful work, and one that demands superlative singing from its principals.”

Following its 1835 premiere, Mary Stuart was initially considered too controversial by authorities, which led to its ban and neglect for more than 100 years.
A performance in Donizetti’s hometown of Bergamo re-introduced the piece into operatic repertoire, where it has grown in popularity ever since.
Today, the opera is valued both for its music—some of Donizetti’s best—and its compelling drama of powerful women in conflict.

In the role of the Catholic queen of Scotland are two singers making Seattle Opera debuts: Serena Farnocchia and Joyce El-Khoury.
Italian soprano Farnocchia has gained fans in the great opera houses of Europe, as well as in Asia.
Lebanese-Canadian El-Khoury continues to make a name for herself as a rising star at the Metropolitan Opera.
Two American sopranos sing Elizabeth, the Protestant queen of England.
Mary Elizabeth Williams returns to Seattle following her portrayal of the leading lady in Tosca (2015) and Abigaille in Nabucco (2015), and Keri Alkema, an artist who’s been highly praised for her “incisive musicality” (New York Times) makes her company debut.

In the role of Leicester, the appealing nobleman loved by both Elizabeth and Mary, is John Tessier, who returns to Seattle following his role as Nadir in this fall’s The Pearl Fishers (2015); as well as Andrew Owens, winner of the 2015 Francisco Viñas International Singing Competition, who makes both his company and role debut.
Mary Stuart also sees the return of two celebrated Seattle artists: Weston Hurt as Talbot, who most recently performed the title character in Nabucco (2015) and Michael Todd Simpson, who was John Sorel in The Consul (2014).
Renée Rapier makes her company debut as Hannah, companion to the Queen of Scotts in her imprisonment.

In February, Seattle Opera offers free public-preview talks on Mary Stuart at libraries throughout the Puget Sound.
For a full list, go to seattleopera.org/calendar.