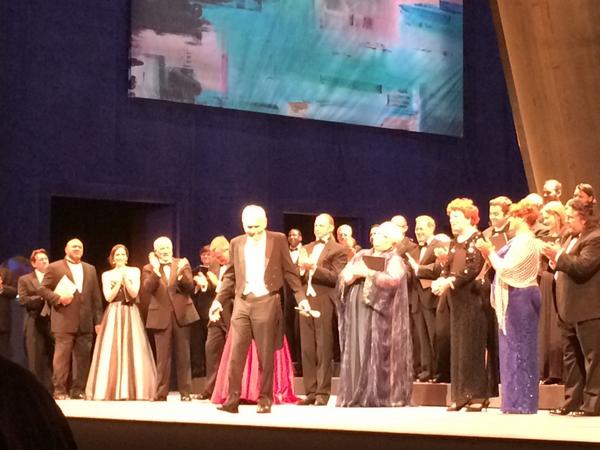 Seattle—With some of the greatest voices in opera gathering together for one night only in a red-carpet affair, Seattle Opera’s Speight Celebration Concert and Dinner thrilled more than 2,500 fans at McCaw Hall and raised more than $1 million on Saturday, August 9.

Proceeds came from ticket sales, dinner sponsorships and donations made in honor of Speight Jenkins, who retires this month after 31 years as General Director of Seattle Opera.
The company’s 2014/15 season is officially dedicated in Jenkins’ honor.

“Saturday, August 9, 2014, was the greatest night of my life, and I am more than grateful to everyone involved,” said Jenkins. “But really this celebration is not about one person—it’s about all of us, and the love that connects us. What success we’ve had at Seattle Opera can be attributed to the love we all share for this glorious art form—the love it demands, and the love it inspires. I love you all. Hojotoho!”

The evening was co-chaired by Lyn and Jerry Grinstein and Laurel and John Nesholm.
Delta Air Lines was the Official Airline of the Speight Celebration.
The 15 artists in the production donated their fees in honor of Jenkins.
Senator Maria Cantwell; King County Executive Dow Constantine; President & CEO of OPERA America Marc Scorca; Director of Seattle Center, Robert Nellams; and General Directors: David Gockley of San Francisco Opera, Wayne Brown of Michigan Opera Theatre, Tomer Zvulun of The Atlanta Opera and Christopher Mattaliano of Portland Opera were in attendance, along with other special guests.
The Speight Celebration was also a time to reflect on the company’s other accomplishments, including its world-renowned Ring cycle and its 50th anniversary. Seattle Opera’s new recording (of the 2013 Ring) and its new commemorative book—a large-format stunner called 50 Years of Seattle Opera—were available for sale at the McCaw Hall gift shop.
The book, written by former Seattle Times music critic Melinda Bargreen, includes dozens of rare photographs and tells the true story of a small regional group that grew into an opera company that has achieved the highest per capita attendance in the United States.

From the very beginning of the evening, Seattle Opera took the festivities up to the highest notch; as guests arrived at McCaw Hall, they were greeted by a red carpet and a photographer.
With designers such as Lanvin, Prada, Jimmy Choo, Chanel, and local Seattle designer Luly Yang represented on the runway, gone was the typical “Seattle casual” as numerous attendees dressed to the nines to honor the departing arts leader.
Also on the glamorous entryway was a tent, specially created for the event, with an artistic floral masterpiece designed by Richard Hartlage (Garden Architect at the Chihuly Garden & Glass) of Land Morphology.
Hartlage’s creation, a 1,200-foot sisal strand, was woven through floral chandeliers suspended from the ceiling. Floral décor and centerpieces were provided by Kendra Yaple of Loves Me Flowers.
All guests who walked through the door had the chance to speak with and mingle with Jenkins at the top of the staircase prior to the show, and during the public intermission reception, catered by SAVOR and featuring sparkling wine from Chateau Ste. Michelle.
Dinner sponsors and ticket buyers were also treated to private receptions in the Allen and Norcliffe Rooms in McCaw Hall.
For the concert itself, an international dream team of Seattle Opera’s favorite artists gave their utmost to honor the General Director who has meant so much to them.
Emcee and mezzo-soprano Joyce Castle gave a hilarious roast of Jenkins, and co-conductors Sebastian Lang-Lessing and Carlo Montanaro led members of the Seattle Symphony and the soloists in such extraordinary musical highlights as William Burden and Brett Polegato singing the Pearl Fishers duet; Peter Rose singing the death scene of Boris Godunov; Mary Elizabeth Williams singing “My Man’s Gone Now” from Porgy and Bess; Kate Lindsey singing the conclusion to La Cenerentola; scenes from Verdi’s Otello with Antonello Palombi, Gordon Hawkins, and Nuccia Focile; Seattle favorite Arthur Woodley singing “Vi ravviso” from La sonnambula; and Stephanie Blythe joined by the male chorus in a comic piece from La Grande Duchesse de Gérolstein.
Blythe and Greer Grimsley also sang a duet from Samson et Dalila.
Tenor Issachah Savage, winner of the 2014 International Wagner Competition, also performed at Jenkins’ special request.
The program featured music from all three acts of Wagner’s beloved Die Walküre: Christiane Libor and Clifton Forbis sang the end of Act One, Grimsley and Alwyn Mellor the beginning of Act Two, and Grimsley concluded the solo performances with Wotan’s Farewell from Act Three.
All the soloists, plus the Seattle Opera Chorus, joined their voices to salute Jenkins with a thrilling “Wach’ auf!” from Die Meistersinger von Nürnberg.
The concert was given, with supertitles, performed on Robert Dahlstrom’s set for Seattle Opera’s Ariadne auf Naxos, with beautiful lighting by Connie Yun setting the mood for each piece.
Tributes to Mr. Jenkins were made by Greer Grimsley, Stephanie Blythe, and Stephen Wadsworth, all recognizing his role in launching their careers to the international stage.
After the performance, Jenkins came up on stage to take a bow and personally say thank you to the artists, orchestra, chorus, staff, and his beloved Seattle audience.
He was met with cheers, applause—even some celebratory stomping from the artists on stage.
Finally, Jenkins recognized his successor Aidan Lang and assured audiences that they would be in good hands
The evening concluded with an elegant hors d’oeuvres and champagne reception in the Kreielsheimer Promenade Lobby, followed by a gourmet dinner held beneath the tent on the Kreielsheimer Promenade with wines by Novelty Hill – Januik.
Chef Kaspar Donier, of Kaspars Special Events & Catering, catered a one-of-a-kind menu specifically for the event, with a nod to the Pacific Northwest, and featuring the region’s summer bounty.

Founded in 1963, Seattle Opera is one of the leading opera companies in the United States.
The company is recognized internationally for its theatrically compelling and musically accomplished performances, especially the Opera’s interpretations of the works of Richard Wagner.
Since 1975, Seattle Opera has presented 41 cycles of the Ring (three different productions), in addition to acclaimed productions of all the other major operas in the Wagner canon.
Seattle Opera has achieved the highest per capita attendance of any major opera company in the United States, and draws operagoers from four continents and 50 states.